WORLD CELEBRATES THE BICENTENNIAL OF THE GREEK REVOLUTION 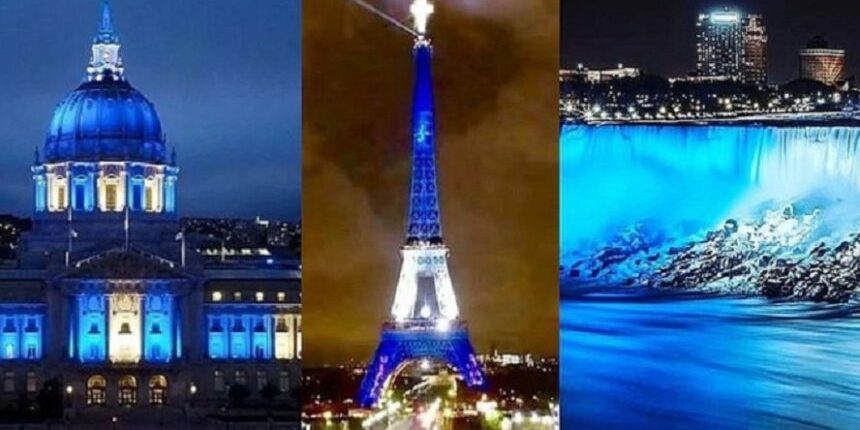 This year, which will be the second March 25th that Greeks in Greece toast in lockdown, things will again be different, but nonetheless will it be commemorated in some big ways, as this year marks exactly 200 years since the revolution began in the Peloponnese.
Determined to make it an Independence Day to remember, even as the pandemic is putting a stop to the normal annual traditions, events for the social-distancing era have been initiated by Greeks and philhellenes around the globe.

UNITED STATES
In the US especially, the many Greek communities have organized a multitude of light shows for the occasion, and even President Joe Biden sent Greek President Katerina Sakellaropoulou a letter, newspaper Kathimerini reported, saying that: “I participate together with the Greek people and the millions of proud Greek-Americans in celebrating this joyful anniversary.”
Iconic American landmark buildings that are to be lit up in the colors of the Greek flag include the San Francisco City Hall, the LAX International Airport, Boston’s Zakim bridge and the stadium of the Boston Celtics, and many more. Besides buildings, there will also be special celebratory lightshows projected on the ferris wheel on the Santa Monica Pier (watch it live here), and at the Niagara Falls (watch it live here) on the US-Canada border.
CANADA

Canada will also host several events, including a light show at Toronto’s CN Tower, with its advanced new lighting system (watch it live here), and a special Drive-by parade in Vancouver ending with a wreath-laying ceremony at the St. Georges Greek Orthodox Cathedral.
AUSTRALIA
In Australia, the Greek flag is to be projected on the iconic Sydney Opera House, on the National Museum of Australia in Canberra, and several other historic- and otherwise important buildings. The Greek Community of Melbourne will host a program featuring lectures, musical events, and public art exhibitions, and the Greek Orthodox Archdiocese of Australia is advertising hundreds of events.
SOUTH AFRICA
The Hellenic Federation of South Africa, meanwhile, has initiated the creation of a giant (50x30sq.m) Greek flag for the occasion. Philhellenes are encouraged to “buy a meter” of fabric for the flag in support of the federation, and it’s intended to be used as an events tent cover for future celebrations.
EUROPE
Finally, of course, many European countries will also be honoring the bicentennial with hosts of seminars, lectures and panels, as well as tributes in the form of illuminated buildings and other, less traditional homages; it’s been reported that the famous Manneken Pis (peeing boy) statue in Brussels will once more be dressed in an Evzones costume, as was also done to show solidarity with Greece during the economic crisis in 2011.