The 31st Hermes Expo: A bridge of cooperation and advancement for Greek and American businesses video 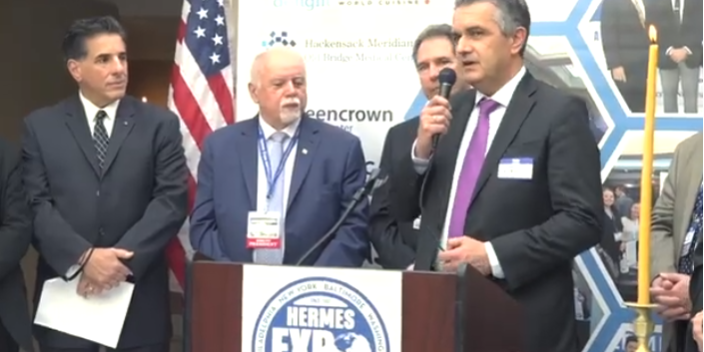 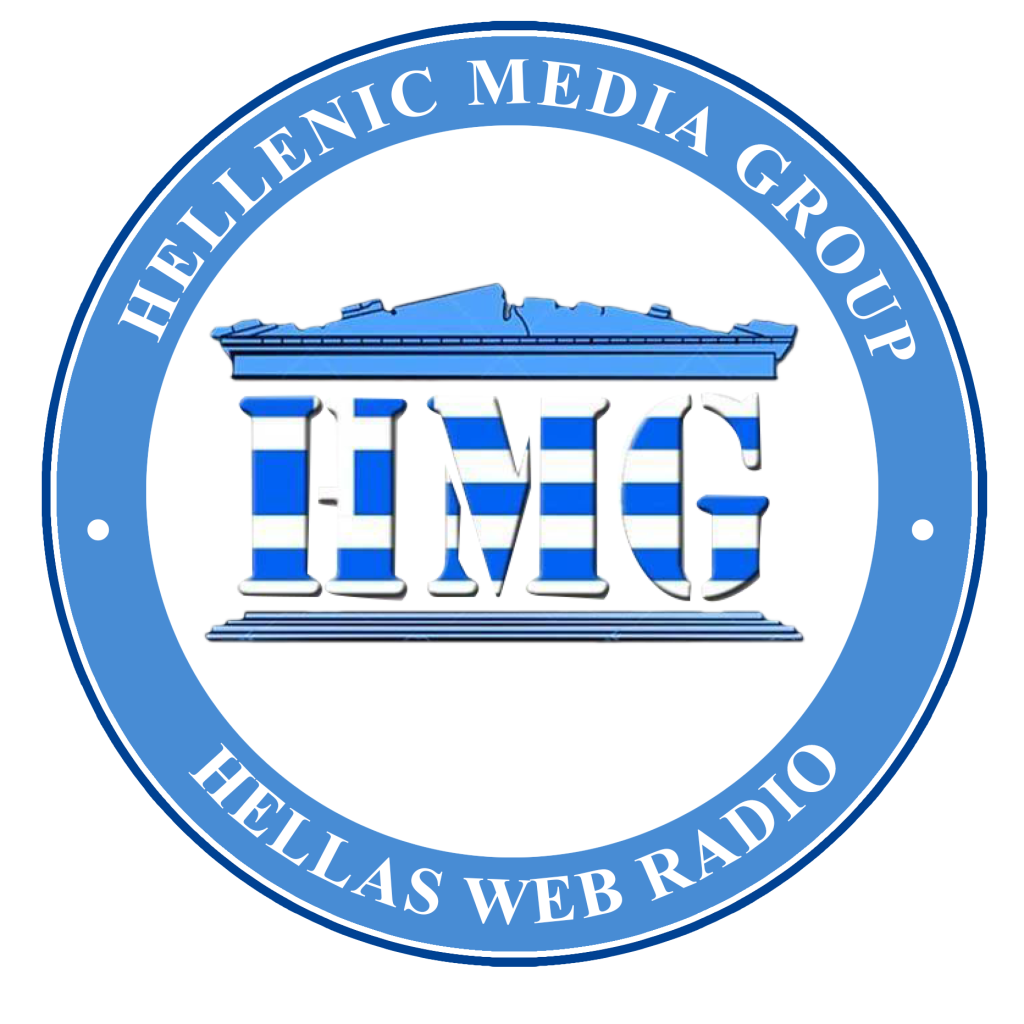 The 31st Hermes Expo: A bridge of cooperation and advancement for Greek and American businesses

With a projected recovery in the commercial sector, the 31st Hermes Expo opened its doors at noon on November 16th in the Dome Room of the Grand Marquis in Old Bridge, New Jersey.

Hermes Expo provides a mine of contacts and businesses. It has been considered a business-to-business (“B2B”) entity since its founding in 1992. The Hermes Expo has featured the products and services of many important businesses, not only from the US but also from Greece. This international tradeshow hosts entire regions, municipalities, chambers of commerce, businesses, individuals, and institutions that promote business activities in Greece and the USA.

This year, the region of Epirus made its debut at the Hermes Expo. Epirus was represented by regional Vice Governors Odysseus Potsis and Vassilios Gorgolis, as well as many representatives from the Chamber of Commerce of Ioannina. This trade mission was led by the Chamber’s president, Dr. Dimitrios Dimitriou, and the Board of Directors. The Governor of the Region of Western Macedonia, Mr. George Kasapides, and the Vice Governor of North Aegean Region, Mr. Pantelis Bournias, were also in attendance. The regions were well-represented and dialogued with exhibitors and visitors from America. 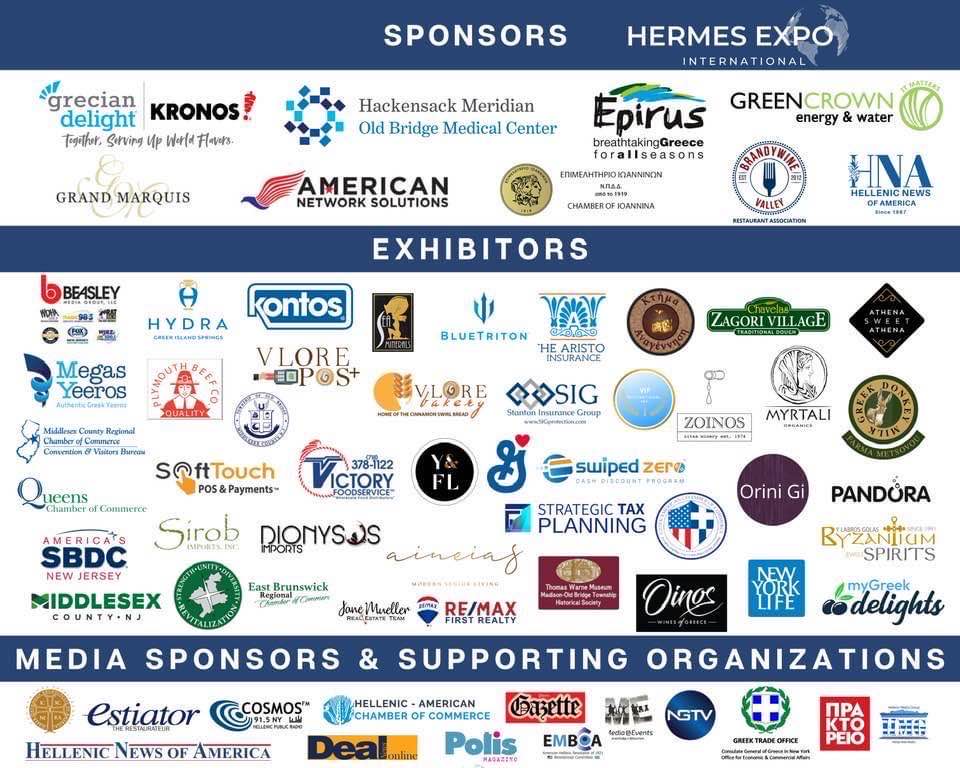 Congratulatory remarks were heard from the Mayor of Old Bridge, the New Jersey State Senate, and Middlesex County. They sent their well-wishes for the momentous success of the event, as it takes place for the second consecutive year in its new home, the Grand Marquis in Old Bridge, NJ. Local authorities and local radio stations, as well as the Historical Association of the region, participated with their own booths, together with the local, regional, and national chambers of commerce with their many members. This year’s sponsors for the Greek Wine and Food event (“Tasting of Hellas”) included The Chambers of Commerce for Old Bridge, Middlesex County, and East Brunswick, The Greek-American Chamber of Commerce of New Jersey, and the Hellenic American Chamber of Commerce of New York.

The Hermes Expo bridges commerce and culture in the USA and Greece. It provides a forum for businesses in America, including, and especially, those owned by Greek-Americans, and Greece, conducing to trans-local activities and professional growth. It promotes Greece’s multiplicity of tourist attractions while showcasing local merchandise.

The Hermes Expo offers businessmen unmediated access. It allows them to communicate directly with the producers and to order from an array of unique products and services.

For thirty-one years, Hermes Expo President, Mr. Paul Kotrotsios, has attracted businesses from Greater Philadelphia, New Jersey, New York, and Connecticut, as well as many other states on the East Coast and Midwest, bringing them in dialogue with his vast and accruing network of American and Greek-American entities. The awards dinner foregrounds persons and companies that have excelled in their fields and contributed to the Greek-American community, an integral part of the American mainstream.

Mr. Kotrotsios expressed his hope to host more exhibitors in 2023 and to increase the representation of Greek companies, chambers of commerce, regions, and municipalities so as to proliferate the access and influence of Greek products in America and American products in Greece. The event forms a nexus between these two great producers, conducing to diversity and utility in commerce. The Herculean efforts of Mr. Kotrotsios and ancillary emissaries have yielded an interchange of merchandise and cultural information in accordance with his 1992 vision of a catalytic site. Many economic partnerships have been forged through Hermes Expo by dint of its constituting the threshold for promoting Greek exports in the United States. Focalized around innovation, Hermes Expo conduces to the expansion of companies on a transnational scale. It aims to connect Greek businessmen to their growth-minded fellow Hellenes and Philhellenes in the United States, creating a constellation of locales, goods, transactions, and ideas. This year’s expo left vendors and visitors enthusiastic about the event, a testament to connections wrought and solidified.