Olympia Forum – Ernst Reichel: “Merkel was considered a leader of the European Union but she was not” 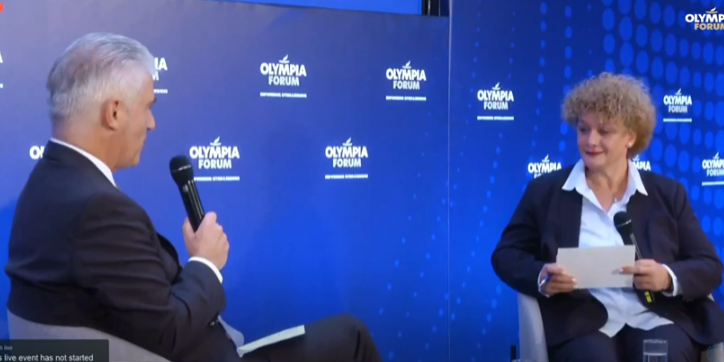 The German ambassador “sees” the next German government as more “left-wing” on solidarity and migration issues.

Reichel stressed that it would be an issue that would inevitably be a concern for Europe in the years to come and that, as he underlined, this would not happen because of the Minister in charge in Germany.

“We are a European Union and we are trying to mitigate the blow of the pandemic. As we are returning to a relative normality in our lives and slowly we will have to return to a certain normality in terms of public spending in our countries. I think the discussion that needs to be had is that we will no longer have such easy access to money.”

Speaking about the new leadership of the German finance ministry, he said that this will be the major issue that will have to be addressed and expressed the view that the finance minister in question will not be able to implement the platform of the party from which he or she comes from because a coalition government will be formed.

He referred to foreign policy and defence issues, describing security as the “holy grail” of national sovereignty which means that most countries in the European Union find it very difficult to lose some of their national sovereignty, but there are several member countries who fear that if a defence and security mechanism or policy is developed, foreign policy will be weakened. However, he appeared pessimistic and also referred to Turkey.

Speaking about the refugee – migration issue, he argued that the next German government will very likely turn out to be more pro-migration and more ‘left-wing’ than the current government “and that will obviously imply that there will be a special emphasis on European solidarity issues, but on the other hand there will be a special emphasis and interest in the humanitarian aspect of the issue.”

As for leadership roles the European Union, Reichel stressed that “Europe has no leader. Merkel was seen as a leader but she was not. That is not the case, nobody alone is the leader of the European Union, because no country would accept anyone else as its leader.”

Olympia Forum II, organised by the Delphi Economic Forum and the newspaper PATRIS.

The Academy’s Board of Governors has approved rules and campaign regulations for the 95th Academy Awards®.
18 Μαΐου, 2022